The Legend of the Four Beggars 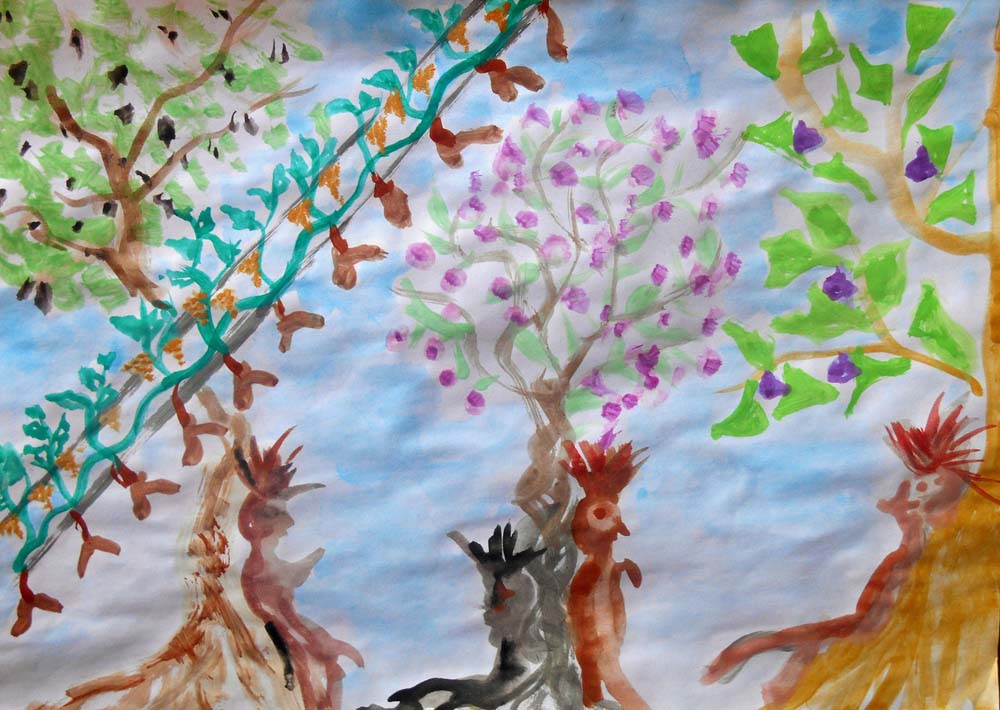 The Legend of the Four Beggars
An Irish tale

Once upon a time there were four trouble-makers whose names seemed predestined. They were called Careless, Pennyless, Good-for-Nothing and Starving. They lived following their whims, sleeping most of the time and waking up only to get the little they needed to survive by begging. Since they ate very a little and they didn’t wash, they weren’t appealing and didn’t inspire any confidence in those who had the misfortune to cross their paths.
Then one day, an unusually violent storm broke out and a poor lost foreigner asked them for shelter while waiting for the sky to pour forth its wrath. Since they were good souls nevertheless, they let the foreigner enter their miserable hut. When the deluge stopped, the foreigner left them promising to send each one a box in which they would find something to sow in the earth and to care for with all their heart.
When the boxes arrived, they obeyed and sowed what they found within – seeds of vine and fig tree, almond pips and nuts.
The earth could not be worked but the trees grew and the four trouble-makers even learned to dry the fruit and then sold it to make a winter dessert.
Careless, Pennyless, Good-for-Nothing and Starving earned more and more money and worked more and more but in order to remember who they were and their story, they decided to call their merchandise The Four Beggars.

These dried foods represent the different religious orders who took oaths of poverty. Their names came from the colour of each dried fruit which gave them the name “beggars” recalling the dress of the four beggar orders: raisins for the Dominicans, dried figs for the Franciscans, walnuts or nuts for the Augustans and almonds for the Carmelites.

The beggars are also called “pachichòis” from Avignon to Marseille. They are part of the thirteen desserts in Provence. They are one of the main ingredients of a traditional Christmas dinner. Marcel Pagnol wrote about it in “La Gloire de mon père”, “We had the great dinner of the thirteen desserts in front of a sparkling fire.” The number thirteen is a reminder of the last supper before the Passion, which gathered Christ and his twelve apostles.

Gioachino Rossini, composer and gourmet, called Volume IV of his “Sins of Old Age” piano compositions “Four Beggars and Four hors d’oeuvres”. He entitled the first four movements “Dried Figs in Re Major”, “Almonds in Sol Major”, “Raisins, in Do Major” and “Nuts in Si Minor and Major”.

Nowadays, the name of “beggars” is given above all to a biscuit. It is a black chocolate biscuit (sometimes white) on which dried fruit are incrusted. The figs are too big to be used there…